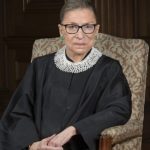 By Alissa Shams and Randi Eisenstein

PROPEL had the pleasure of co-sponsoring an event at the JCC in Deal along with the NJ Shore Film Festival. We featured the documentary RBG –  the story of Supreme Court Justice Ruth Bader Ginsburg. This inspiring documentary about 86-year-old Ruth Bader Ginsburg, by Betsy West and Julie Cohen and co-produced by Storyville Films and CNN Films, describes the life of a woman raising a family together with her devoted husband while fighting for women’s equal rights and then rising to be Supreme Court Justice.

Over fifty men and women gathered at the JCC for wine and cheese and to watch this documentary about a strong, Jewish woman leader. We are grateful to Gem Suslovich, who monitored an interesting talkback at the end of the movie.  Gem reminded the audience that all women can relate to the story of RBG. It is the story of working hard to achieve goals, making a difference in the world, and remaining loyal to your family.

Ruth Bader was born in Brooklyn. Her father was a Jewish immigrant from the Ukraine and her mother was born in New York to Austrian Jewish parents. While attending Cornell University, Ruth Bader Ginsburg met her husband Martin Ginsberg at the age of 17. In 1956, Ruth Ginsburg enrolled in Harvard Law School as one of nine women in a class with 500 men. Justice Ginsburg is a prominent legal figure, but she is also a wife, a mother and a grandmother. Her granddaughter who recently graduated from Harvard Law School affectionately refers to her grandmother as her “bubbie”. The movie describes a beautiful and supportive marriage between Martin and Ruth. Their relationship allowed for both professional and personal successes. RBG can be credited with being a champion of women’s rights in the work place. Many of her cases were ground breaking, and resulted in changing the paradigm for working women in this country. The movie also depicted the friendship between Justice Ruth Ginsburg and Justice Anton Scalia. Although they shared very different views, they had great respect and admiration for one another.

A special thank you to Marcy Feldman and Steven and Esther Doueck for helping to coordinate this event.

We look forward to hosting additional PROPEL events this summer, including a panel discussion in New Jersey with women with various careers, including photographers, a nurse, a teacher, a yoga instructor, a pastry chef and a custom designer.

If you are interested in a career, please reach out to PROPEL and we can help you fulfill your professional goal.

Ready to get started?

Discover the PRO in you

Sign up for our newsletter to stay informed on the latest from PROPEL, events, and more!